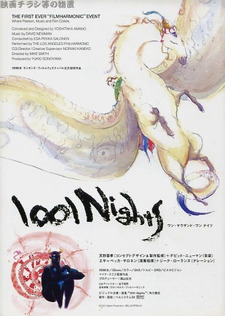 Presented in the form of a feverish love dream, 1001 Nights (based on Amano`s book of artwork) is the first performance of the groundbreaking "Filmharmonic" series, which presents new orchestral works by film composers in tandem with short films made by A-list directors. Nights is the series's only animated work, and plans originally called for the film to be completely computer animated.